What is a Smudge Stick?

The smoke from these dried bundles changes the ionic composition of the air and can have a direct effect on reducing our stress response. Sage, lemongrass, and other herbs release negative ions when burned. “Negative ions are odorless, tasteless, and invisible molecules that we inhale. Negative ions are believed to produce biochemical reactions that increase levels of the mood chemical serotonin, helping to alleviate depression, relieve stress, and boost our daytime energy”- WebMD. Smudging is ritual alchemy — changing and shifting the air element. It can easily be traced throughout the East in parts of Asia and dating as far back to Ancient Greece.

This earthy shrub is also known as salvia or “healing plant”. The smoke is used to rid people and places of negative energies and to improve the overall composition of the air.

This trees name, Deodar, translates to "timber of the gods." Tradition holds that the wood of the cedar tree holds wise and powerful spirits. Cedar is often used in smudge sticks, inviting unwanted spirits to leave and as a protection against the entry of evil.

This relative of Frankincense, literally means “Holy Wood”. Much like Sage, it is burned for its energetic cleansing properties. Palo Santo is also very healing to the physical body, and can be used to clear a home of energies associated with illness.

This flowering plant from the verb lavāre, means “to wash”; to wash away stress and negativity. It has a calming aroma, as well as powers of cleansing and protection. It is regarded as a defense from negativity and has traditionally been used in herbal medicine to provide a soothing effect on the nervous system.

"This natural grass translates to "holy fragrant grass”. It is attractive and pleasing, so is it attractive to good spirits and energies. Sweetgrass is traditionally braided in 3 strands representing love, kindness and honesty. As a sacred plant, it is used to bring in peace and positivity. 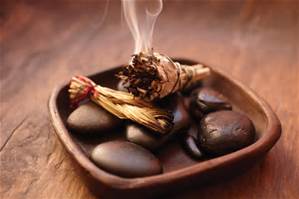